Dive operators Regions Best diving Cost of diving Marine life
If you ask an experience scuba diver why scuba dive the Cayman Islands, you might get a blank response. The question may shocked them, The Cayman Islands are one of the best dive destinations in the world. It is a “given” that you should dive there. However, not everyone knows about the Cayman Islands and scuba diving, so here are a few pointers for you.


The Cayman Islands are a part of the Greater Antilles in the Western Caribbean. They are a British Overseas Territory with three main islands: Grand Cayman, Cayman Brac and Little Cayman. The Cayman Islands are located south of Cuba, and between Yucatan Mexico and Jamaica. These islands are mountain tops of the underwater Cayman Ridge, which is an extension of the Cuban Sierra Maestra range. The islands are mostly surrounded by the Cayman Trench which reaches a depth of 25,216 feet (7,686 m). These deep waters are nutrient rich and the up-flows help feed the coral reefs and the marine life found on them.


The Cayman Islands was one of the first destinations that scuba divers started to flock to. Many of the pioneers that created the sport of scuba diving lived on these islands, and if they did not live here definitely frequent the islands. The visits of these scuba divers lead to the start of the island's tourism trade. The secret did not stay safe for long as other tourist fell in love with the charms of the islands. Today it is as well-known as a honeymoon destination and a beach destination as it is a dive destination. It is also a major cruise ship destination.

The best operators in: Cayman Islands 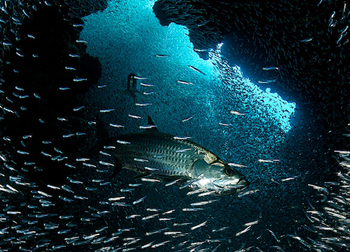 Be the first to review!Region: Little Cayman

There are a number of dive sites in the Cayman Islands that hold court on list of the worlds best dive sites. While that is a great honor, it also can cause problems. The large number of divers on a few dive sites, were causing stress on those sites leading to poor health for the sites. Other sites were seldom visited.


Just over a decade ago, the tourism department, tourism stakeholders and the local scuba diving industry started a program to address those issues. The dive 365 program lets divers know that they can dive a different dive site every day for a year. The program has 240 dive sites around Grand Cayman Island, 65 dive sites are located around Cayman Brac and Little Cayman 60 dive sites.


The program reminds divers that while the “best in the world” dive sites are great, there are hundreds of hidden gems that you might just like a little more. Dive 365 has been very successful. The promotion of the lesser known dive sites has reduced the diving pressure on the most popular sites. Those “best in the world” sites are still the best, however, divers are finding they can enjoy other dive sites as well. The number of repeat visitors and the frequency of those visits have improved as well.


The list of dive sites is stable, however, some dive sites have been replaced with new finds or new artificial reefs. List of best sites is always objective. If you have a favorite dive site in the Cayman's and it is not here, it is because the list is too short for them all. I am sure that each of the 365+ dive sites in the Cayman Islands has someone who fully believes that site is the best in the world. If you are thinking of diving the Cayman Islands, you should consider some of these as potential dives:


·        Bloody Bay Marine Park on Little Cayman. You could spend an entire vacation in this park and not dive the same dive site twice. Bloody Bay Marine Park has over two dozen dive sites in protected waters. The Bloody Bay Wall is the home of many of the dive sites. Starting on a reef that is just 20 to 25 feet deep dives proceed to the wall that drops to over 1,000 feet. You need to keep an eye on your gauges and not get too distracted. A wall of colorful sponges, healthy corals and abundant marine life in both number and species coupled with 200 foot visibility can easily lead you deeper than you wanted. Different sites along the wall have given this location the title of the most visually spectacular wall in the Caribbean.


·         USS Kittiwake. The Kittiwake was not one of the original 365 dive sites, but today is one of the most popular dives in the Cayman Islands. Sunk as an artificial reef in 2011, the 251-foot-long (76.5 m) former submarine support ship sits in just 60 feet of water off the famous Seven-mile Beach on Grand Cayman Island. The ship has five level, the first three suitable for open water divers. Given its location, the water's visibility and the depth the site is also a favorite for snorkelers.


·        MV Captain Keith Tibbetts, Cayman Brac. This is the leading dive site around Cayman Brac. This is 330 foot long Soviet-built Koni II-class frigate designated 356. The Frigate was the property of the Cuba Navy until sold to the Cayman’s to use as an artificial reef. There are a few different reports on how the Cuban's became the owners of the ship. Some reports say that it was built for the Cuban Navy. Other reports say that when the Soviet Union fell, the Navy withdrew leaving some ships behind. Having no use for the ship, it was sold to Cayman's to be used as a dive site. The ship was scuttled in September 1996. It sits upright in 90 feet of water reaching to just 20 feet below the surface.


·        Eden Rock and Devil’s Grotto south of Georgetown Grand Caymans. These two shore dive sites are dived together. Eden Rock has tunnels, small caverns, and swim-through. Devil’s Grotto is  photographers paradise due to the play of lights and plentiful marine life.


·        Sunset Reef at Sunset House resort Grand Caymans. Sunset House is an Icon of scuba diving, not just in the Cayman Islands but around the world. Sunset reef is one of the best beginner dive sites in the world. It is reached from a pier at the Sunset House Resort. Entry from the pier is into 30 feet of water. The reef sloops to about 50 feet among many canyons. Photographers love this site, one reason is a 9-foot tall bronze mermaid statue at the base of the reef. Another is that the world-famous underwater photographer, Cathy Church, has her photo center here. The LCM Nicholson is a sort swim away sitting at 60 feet in the sand.


·        Babylon North Wall Grand Cayman. This site is a distance from the main tourism areas and the dive shops found there. Therefore, it is primarily a dive site only visited by liveaboards. While the Cayman islands is well-known for wall dives, this one is often mention as the “best of the best”


·        Stingray City: Stingray City is considered the world's 'Best Twelve Foot Dive'. Well so says at least one dive operator. More likely your dive will be four feet, but that does not matter. Stingray City is a shallow sandbar on the north side of Grand Cayman Island. The story is that decades ago, fisherman used to sail in to this weather protected area and would clean their catch before heading to the markets. The scraps were thrown overboard. Atlantic Southern Stingrays would show up to feed on the scraps. Today the fisherman are not the main ones feeding the stingrays. Thousands of tourist come here to scuba dive or snorkel with the rays and feed them pieces of fish.

Cost of diving in Cayman Islands

The Cayman Islands is a very popular destination for a wide range of tourist. You can stay in expensive five star all-inclusive resorts or in more modest condominiums. A two tank boat dive will cost on average $100. However, many of the 365 dive sites are shore diving sites. In fact, The Cayman Islands are often rated as the second best shore diving destination in the world behind Bonaire. A number of the dive centers will add unlimited shore dives for free when you do a boat dive with them. Other dive centers are happy to rent you a dive cylinder for $20 a day and provide unlimited fills at just $35. So in this example you can do three shore dives for less than $60.

The Cayman Islands are a land based diving destination. Currently, only the Cayman Aggressor V Liveaboard is sailing the islands of the major fleets. If you wish to dive all three islands, then a liveaboard is the only practical way to do so. While private boats will take you between Cayman Brac and Little Cayman for a fair fare, there is no boat service between Grand Cayman and those two islands so you must fly. Flying would mean losing two days of diving.

The Caribbean has a health range of different species of marine life. The Cayman Islands have over 500 species of reef fish plus many pelagic species coming from the deeper water. In 1503, Christopher Columbus called the islands “Las Tortugas”, after all the turtles he found there. In the centuries that follow, the turtles were hunted almost to extinction. However, conservation efforts have raised the numbers up. Seeing turtles while diving is very common. 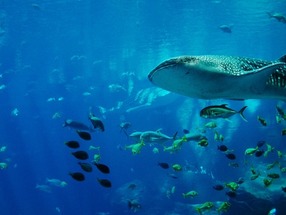 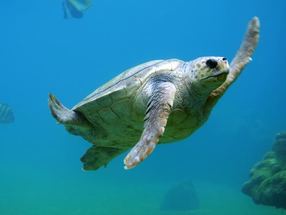 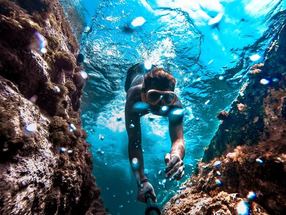 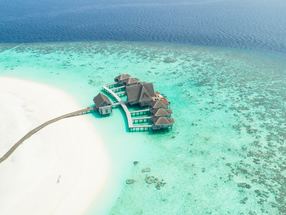 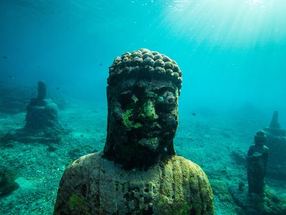 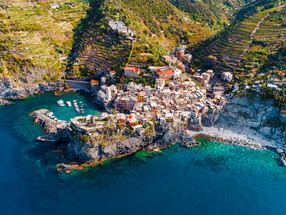 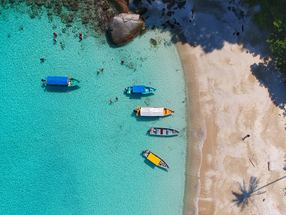 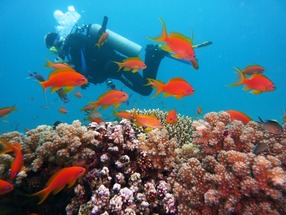 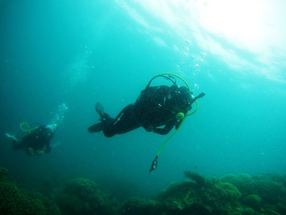