Dive operators Regions Dive seasons Best diving Cost of diving Marine life
Cyprus is the third largest island in the Mediterranean and offers a wide range of diving activities, from numerous wrecks- Including the world famous MS Zenobia,  to historical dives and plenty of marine life. Cyprus has something for every type of diver around.


Why dive in Cyprus?
Cyprus offers a great overall package for divers and their families. The island is a tourist heaven, with lots of history and activities. The island offers the perfect combination, where divers can go and dive in the morning, while still offering a large range of activities to keep non-diving family members entertained.
It has to be said that Cyprus does not offer the best diving in the world (far from it, you will have to travel much further away for that) however it does have some great Mediterranean diving. Including the jewel in its crown and one of the best wreck dives in the world the MS Zenobia. In addition to the Zenobia Cyprus is home to a large number of wrecks due to its long maritime history, so if you have a “lust for rust” then you can not go wrong with choosing Cyprus.

The best operators in: Cyprus 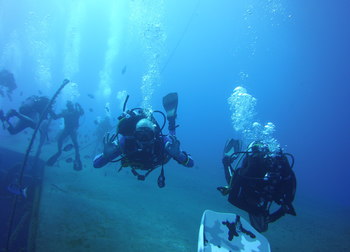 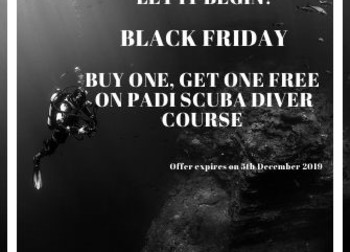 Be the first to review!Region: Paphos

Be the first to review!Region: Paphos

Be the first to review!Region: Northern Cyprus

Be the first to review!Region: Ayia Napa

Be the first to review!Region: Protaras

There are five main diving areas on the Greek side of the island of Cyprus. From the most eastern area, they are Paralimni, Larnaca, Limassol, Paphos, and Polis. While there are a few wrecks around the coast, the majority are in Larnaca including the MS Zenobia. The rest of the Cypriot coast from Limassol to Polis, offers a wide array of sites, including multiple caverns and caves.

MS Zenobia
The jewel in the crown of Cypriot diving, the MS Zenobia is a RO-RO ferry that sank on her maiden voyage in 1980. The wreck lies very close to Larnaca and provides a wide range of diving opportunities. The ship is 180m (590ft) long and an impressive 28 m (92ft) wide. The Zenobia lies in 42m (138ft) of water, with the top of the wreck being at 16m (54ft). Visibility at the Zenobia is stunning, often reaching or even exceeding 40m.


The Zenobia is an interesting dive due to its sheer size, and the fact that its cargo of trucks was never salvaged. As you explore the ship, there is a huge number of trucks still in the holds and lying on the seabed. In addition to looking into history, the wreck is now home to a large number of fish. On the Zenobia, you can regularly encounter, barracudas, tunas, Groupers, and even turtles.


Diving the Zenobia has something for everyone. From recreational divers who can explore the outside of the wreck to advanced wreck divers who want to conduct exploration deep into the bowls of the ship. Although it is never recommended to penetrate any wreck, without the appropriate training and certification.


Larnaca
Aside from the Zenobia Larnaca is the wreck capital of the island with a host of other offerings. Diving from Larnaca you can dive the following wrecks:

Limassol
Limassol offers a mix of diving activities with a couple of wrecks and a host of other sites including plenty of tunnels and caverns. From Limassol you can access the following dive sites:
Paphos
Paphos, which is located in the south west of Cyprus, offers a nice mix of wreck and nature diving. The waters around Paphos are rich with plenty of marine life at most sites. Wrecks you can dive from Paphos include:

Paphos also has numerous other dive sites, some of the best include:

Polis
Polis doe does not have any wrecks but is home to a rich and diverse marine life. With plenty of things to spot. Some of the best sites around Polis include:

Paralimni
To the east of Cyprus is Paralimni, which is close to the legendary party resort of Agia Napa. The area only has one wreck but offers a large number of dive sites that have a rich and diverse marine life for the Mediterranean. Notable dive sites in the area include:

You can dive year-round in Cyprus since the water temperature varies from 25C in the summer to 17C in the coldest months. The main diving season coincides with the summer tourist season from March to November. While you can dive year-round, the weather conditions can be a little rough in the winter, making access to some of the offshore sites a little more challenging. Bear in mind that some operators take part of the winter season off and are closed for business.

Cost of diving in Cyprus

Diving in Cyprus is relatively inexpensive and will vary depending on the season. Expect to pay more during the summer high season, than you would during the shoulder seasons. Typically, you will pay anywhere between €25/$28 and €40/$48 per dive depending on the dive site and whether it is a boat dive or a shore dive. One way to cut cost is to bring your own gear, so you are only paying for tanks and weights and not expensive rental gear.

Discounts
If you don’t pre-book, then it is possible to negotiate discounts with the various operators. The level of discount you get will ultimately depend on the number of dives/courses you are planning on doing, and how many people are in your party. Dive professional may also be able to negotiate a “Professional Courtesy” discount if they are in town for a few fun dives.
Cyprus Scuba Diving Courses
You can find a wide range of dive courses in Cyprus. Whether you have never dived or looking to further your education or even start your professional journey. Many dive operators in Cyprus offer everything from Open water through to instructor courses. The main training agency on the island is PADI, although there are a few SSI operators around. If you want to delve even deeper, then you can also find several technical diving training centers on the island. The predominant technical training agency on the island is TDI, but you can also undertake PADI technical courses.

Is it mainly liveaboards or day trips?
Almost all the diving in Cyprus is day trip, in fact as far as we know there are no dive liveaboards that operate in the waters around the island. Day trips are split with a healthy mix of boat dives, normally done from a RHIB (Rigid-Hulled Inflatable Boat), and a decent selection of boat dives as well.

How easy is it to arrange diving?
Arranging diving in Cyprus is simple, particularly in the high season. Almost every operator on the island has an online presence, and booking online is simple enough. You can also opt not to pre-book, and just turn up to arrange your diving. Typically, you can arrange to start your diving the next day.

Due to the closeness to shore of most dive sites in Cyprus, you do not have regular encounters with large pelagics, that you can see at other Mediterranean destinations. That being said, the waters around Cyprus are incredibly rich, and there is plenty of marine life to be seen, especially around some of the wrecks (Including the MS Zenobia). Diving in Cyprus you can encounter: